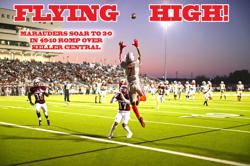 In a rematch of last season’s Bi-District Playoff Game victory against Keller Central, the Marcus Marauders appeared to be at least close to postseason form already, just three weeks into the new season. Marcus got plenty of contributions from an upstart running game as junior running backs Walker Wells (43 yards) and Gabe Espinoza (15 yards) book-ended first- and fourth-quarter touchdown runs around five Garrett Nussmeier touchdown passes. A stout defense flustered and flattened Keller Central throughout the game with equal doses of power, persistence and passion. Ultimately, Marcus was way too much for the Chargers once again in a thorough 49-10 victory that sends the team riding high into the open week.

Thursday night’s was a game that featured just about everything that has quickly come to define these 2020 Marauders: Nussmeier extending plays with his feet and impressing with his arm, a bevy of pass-catchers making plays all over the field, an opportunistic defense applying pressure and forcing takeaways and plenty of players adding quality content to their highlight reels (J. Michael Sturdivant’s leaping Randy Moss routine on the first of his two TD grabs, Nussmeier’s back-foot frozen rope to Tyler Schott, Bryson Wade forcing a fumble and Jake Jund recovering it, Christian Espinoza’s punt return and Aaron Thomas’ interception just to name a few).

Nussmeier finished the game with 205 yards passing and five touchdowns (while completing 76 percent of his passes), Gabe Espinoza recorded the team’s first 100-yard rushing performance of the season, four different receivers caught touchdown passes (Sturdivant, Schott, Dallas Dudley and Connor Vaughn) and the Marcus defense limited Keller Central to just 144 total yards. With the open week looming in Week 4, the Marauders will take the opportunity to tighten a few things up before playing Flower Mound in the Mound Showdown in two weeks. 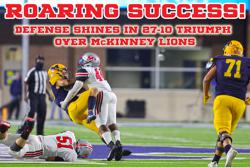 McKINNEY -- Bolstered by a gritty, relentless defense and another sterling performance from the passing game, the Marcus Marauders took down the McKinney Lions on Friday night, 27-10.

McKinney running back RJ Carver opened the season against Plano last week by rushing for 152 yards and two touchdowns. But Friday, a stingy and aggressive Marcus defense limited Carver to just 46 yards on 17 carries (2.71 yards per carry). McKinney's lone touchdown came with just 4:18 remaining in the game.

Junior CB Zach Morris thwarted one McKinney drive with an end-zone interception, and another with a right-place, right-time fumble recovery. The Marauders' front seven remained locked in all game long and repeatedly turned McKinney away with a bevy of big sacks, bigger hits and a handful of fourth-and-short denials.

Offensively, QB Garrett Nussmeier was at his gunslinging best once again, passing for 341 yards and three touchdowns. He also paced the team in rushing for the second consecutive week with 24 yards. Nuss' favorite targets on this night -- Tyler Schott (six receptions for 120 yards and two scores), J. Michael Sturdivant (11 catches for 94 yards) and Connor Vaughn (10 grabs for 86 yards and a touchdown) -- combined for 27 receptions, 300 yards and all three touchdowns.

It was another quality win for a Marcus team that has won 13 of its last 14 games dating back to last season. The Marauders have a short turnaround this week with a Thursday road game looming against Keller Central. 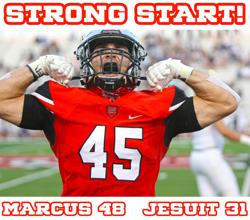 In his two previous season-opening starts with Marcus, senior QB Garrett Nussmeier was on the losing end twice – and he was determined not to let it happen again Friday night against Jesuit. He gave an impassioned pregame speech to that effect, and then went about doing his part to start his senior season the right way -- and he got a LOT of help from his teammates on both sides of the ball along the way. The result: A stirring 48-31 triumph during which Nussmeier threw for 364 yards and four TDs, and ran for a team-leading 34 yards and another score.

Receivers J. Michael Sturdivant (113 yards and two TDs), Dallas Dudley (99 yards) and Tyler Schott (90 yards and a TD) accounted for 302 receiving yards, and H-back Connor Vaughn chipped in with 49 receiving yards and a TD. On the ground, four Marcus ball-carriers recorded 28 or more yards rushing (including junior Gabe Espinoza, who scored Marcus’ final touchdown on a 4-yard run late in the game).

On defense, senior CB Christian Espinoza delivered a leaping, one-handed interception for the ages, the undeniable highlight for a unit that remained relentless and resilient all night long. Junior kicker John Wegendt was a perfect 2-for-2 on field-goal attempts and booted all six of his extra-point tries. In the end, it was a fun, festive opening night for the Marauders – and the first time Nussmeier’s ever been 1-0. Next week, it’s on to McKinney.