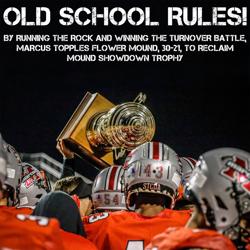 It probably seemed a bit old-fashioned by today's wide-open, air-it-out standards, but make no mistake: The Marcus Marauders' 30-21 victory over Flower Mound on Friday night was a throwback thing of beauty. And the recipe was quite simple. Run the rock. Control the clock. Win the turnover battle. Win the game. In the process, Marcus brought the Mound Showdown trophy back home for the 13th time in the rivalry's 23 games and for the third time in the last four matchups.

Powered by Ben Perlmutter and Chance Banner, the Marauders (3-2, 2-0) delivered a decidedly deliberate gameplan that featured 48 runs and just 24 passes. Perlmutter recorded his first-career 100-yard game (21 carries, 110 yards) and scored two first-half touchdowns to help the Marauders take a 16-7 halftime lead. Banner, meanwhile, added 79 yards on 16 carries. The Marauders also got strong offensive contributions from two-way players Jake Ballard and Chance Sautter, who both recorded second-half touchdown runs. Ballard's put Marcus up, 23-14, in the third quarter, Sautter's made it 30-21 late. On the night, Marcus finished with 214 rushing yards, exactly twice as many as Flower Mound.

Junior tight end Aidan Grummer led all Marcus receivers with 58 yards on three receptions, including a clutch 25-yard grab on third-and-19 to set up Ballard's touchdown.

Senior CB Kole McKnight paced a ball-hawking defensive performance that accounted for four takeaways on the night. McKnight's two interceptions (including his second-consecutive game-clinching pick on the heels of last week's pick-six against Hebron) give him three in his last five quarters of play. Sautter and Ballard also recorded tide-turning interceptions. The Marcus defense allowed 256 total yards (but 154 of those came on just two plays). 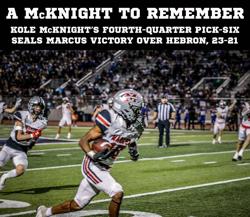 CARROLLTON, Texas -- As far as district openers go, Friday's against Hebron wasn't always pretty for the Marcus Marauders. It was a night when the offense struggled to find a rhythm and Hebron gained more first downs, more total yards, more passing yards, more rushing yards and more touchdowns. It was also a night when a rugged and opportunistic defense, and flawless footwork from senior kicker Michael Petro, kept rising to the occasion for the Marauders.

Ultimately, though, it was a night when senior CB Kole McKnight made a dramatic fourth-quarter house call with his first interception of the season to put the game away for the Marauders. The 36-yard pick-six came with just 7:07 remaining, put Marcus up, 23-14, and derailed a surging second-half Hebron offense that had turned a 16-0 halftime deficit into a 16-14 nail-biter.

McKnight's big play prompted Marcus head coach Kevin Atkinson to call his game-clinching cornerback the "Homecoming King" after the game, a reference to McKnight and the Marauders spoiling Hebron's homecoming celebration for the second consecutive season. Senior Swiss Army Knife Chance Sautter delivered an inspired performance from start to finish in his most complete game of the season. He forced a fumble deep in Marcus territory on Hebron's game-opening drive, returned an interception 32 yards to set up a Petro field goal just before halftime, led all Marauders with 29 yards rushing on four carries and caught two passes for 11 yards.

And then there's Petro, who accounted for three first-half field goals (including a 48-yarder into the wind), booted both extra-point attempts and pinned Hebron inside its own 10-yard line twice with precision punts. Clearly, on a night when the Marcus offense needed them most, the defense and special teams units delivered in a big way. 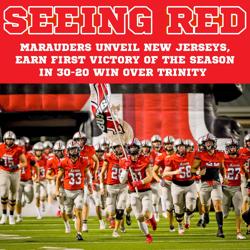 In a surprise unveiling of sorts Friday night against Euless Trinity, the Marcus Marauders broke out their new Jordan Jumpman Red jerseys for the first time. They also broke out to a fast start and, ultimately, broke into the win column for the first time this season with a gritty 30-20 victory.

Marcus built a 10-0 first-quarter lead on the strength of kicker Michael Petro's right foot and running back Ben Perlmutter's legs. But Trinity controlled the second quarter with a methodical, plodding rushing attack that ate clock, drained momentum and sent the Trojans into halftime with a 13-10 lead. Clearly, though, the Marcus coaching staff made the right adjustments while both bands were performing during the intermission as Marcus outscored Trinity in the second half, 20-7.

A Brock Golwas interception in the third quarter furnished the Marauders' offense with a short field that led to Chance Banner's touchdown run and a 17-13 Marcus lead. One series later, Petro's second field goal of the game put Marcus ahead, 20-13, heading into the fourth quarter. Trinity responded with a grueling 15-play, 75-yard march to knot things back up, 20-20.

The final eight minutes of the game, however, belonged to the Marauders. They scored on two of their final three offensive possessions, including a thing-of-beauty, 36-yard TD pass from Cole Welliver to Ashton Cozart and Petro's clinching third field goal of the game that put Marcus up 10, 30-20, with just 45 seconds remaining.

Welliver finished the night with 225 yards passing and one touchdown while Cozart accounted for 65 yards receiving on five catches. Both Cozart and WR Isaac Khattab drew pivotal pass interference calls that led to Marcus points and Petro delivered a near-perfect performance as he went three-for-three on field goals, three-for-three on extra points and twice pinned Trinity inside its own 10-yard line with his punts.

The win sends Marcus into its open week on a high note. The team opens district play against Hebron on September 23.

On a night when Cole Welliver's 90-yard touchdown strike to Ashton Cozart provided a brief glimpse of just how explosive the Marcus Marauders' offense can be, it was a steady dose of excellence from state-ranked Southlake Carroll that made the biggest statement Friday. Carroll (No. 3 in the Dave Campbell's Texas Football AP poll) deployed a power running game, an opportunistic passing attack and staunch defense en route to a 38-7 victory.

Welliver's much-needed, quick-strike dime to Cozart came early in the second quarter and brought the Marauders to within a touchdown, 14-7. Marcus maneuvered deep into Carroll territory on multiple possessions before and after the long TD, but ultimately was unable to capitalize. The Dragons took a 21-7 lead into the halftime locker room and extended their lead to 35-7 following a statement-making 97-yard drive with 4:19 left in the third quarter.

Carroll collected 475 yards on the night, including more yards rushing (265) than Marcus had total yards (262). Yet, the Marauders delivered their share of highlights. Cozart (108) and fellow senior WR Isaac Khattab (101) both eclipsed 100 yards receiving and Welliver finished with 247 yards passing. On defense, senior DL Luke Shankel returned a Carroll fumble to the Dragon's 18-yard line on a play during which Marcus was flagged for two post-possession penalties that brought the ball back to its own 34-yard line.

The Marauders will look to secure their first victory of the season next week when they host Trinity, yet another area heavyweight. 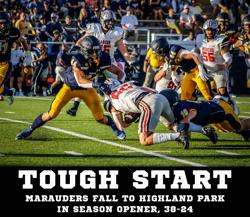 DALLAS -- When you're playing one of the toughest non-district schedules in the state, there are no early-season gimmes. And so it is with the 2022 Marcus Marauders (ranked No. 11 in the Dallas News 6A Preseason rankings), who opened the season Friday night at No. 10 Highland Park with a 38-24 loss that was way more competitive than a two-touchdown deficit might suggest.

Marauders junior quarterback Cole Welliver was composed and confident in his first-career start, finishing with 310 yards passing and two touchdowns, including one to running back Chance Sautter to cap a brilliant two-minute-drill drive near the end of the first half that tied the score, 10-10. He found senior receiver Ashton Cozart late in the third quarter to bring Marcus to within seven, 24-17. One drive later, Welliver's deep connection to Mason Chavis set up RB Chance Banner's short TD run and a 24-24 tie early in the fourth quarter.

Highland Park regained the lead just one play later with a deep touchdown pass and then spent the rest of the game eating clock before ultimately adding the clincher with just 1:35 remaining.

Next week, Marcus hosts Southlake Carroll, currently ranked No. 4 in the Dallas News 6A Area rankings.